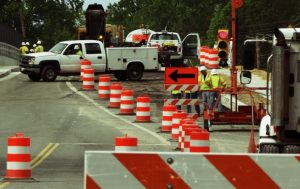 The work zone crash occurred in June 2010 on a two-lane U.S. Highway where the construction crew was replacing the bridge and approaches to it. The state Department of Transportation had prepared plans for the project, including traffic control, and had supervisors on site to ensure compliance. Defendant construction worker was operating a Caterpillar motor grader in the northbound lane. Plaintiff, with four passengers in his van, attempted to go around the motor grader by crossing the double-yellow line into the southbound lane. The motor grader then turned left, and the two vehicles collided. Plaintiff suffered a double-fractured jaw, broken leg and bruised lung.  END_OF_DOCUMENT_TOKEN_TO_BE_REPLACED