Fort Lauderdale pedestrian accident attorneys know electric scooters and pedestrians don’t make for the safest mix on our sidewalks. Fort Lauderdale commissioners acknowledged as much in a recent two-hour meeting. However, as the mayor noted, officials don’t have any interest at this point in banning the e-scooters. One commissioner even tested a model before the meeting, concluding it wouldn’t be in the city’s best interest to eliminate e-scooters as a transportation option, particularly one that gives the city a “cool vibe.” 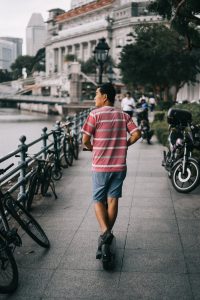 Officials did say they eventually want to enact a measure that would require the e-scooters to reduce their speed (currently at 15 mph, which is too fast to mingle with pedestrians) and also be relegated to bike lanes. The latter is within the purview of the state legislature, which is in the early phases of passing such a measure. For now, scooter riders must stick to the sidewalks.

Our city is the first in Florida to allow e-scooters, even as the metro area was named in a recent Dangerous by Design 2019 report as being among the worst in the country for deadly pedestrian accidents. Although city officials reason that e-scooters could help us carve out a tourism market advantage over other surrounding communities, being the first means we’re facing a host of regulatory and safety issues for the first time.

Although other communities like Miami, Tampa and Coral Gables have been toying with the idea of adopting e-scooter provisions, Fort Lauderdale is the only city in Florida to have a program that is fully launched. City commissioners had already voted to approve e-scooter presence when they realized state law technically prohibited their use anywhere but sidewalks, which is what prompted officials to revisit the issue, according to The Sun Sentinel. They noted the position of several traffic policy experts who have concluded e-scooters help to fill gaps in the transportation network in our urban landscape. They can help carry riders the final few miles from mass transit to their destination.

In addition to reducing speed and getting the dockless e-scooters in bike lanes, officials also want to designate specific corrals for scooter parking, designate off-limits areas and limit ridership to those 18-and-older. (Technically, the four providers of the service – Bolt, Lime, Bird and Gotcha – do require riders to be 18, but absent city traffic ordinance, children are riding by way of their parents’ account, prompting several public complaints. Other issues motorists and pedestrians have reported include reckless scooter operation and “littering” the scooters in streets or across sidewalks after use. Another proposal could see e-scooter helmets – currently optional – as mandatory, potentially helping to save lives.

To cover the cost of enforcing new e-scooter speed limits and other provisions, commissioners are examining whether to collect higher fees from the four service providers. Data from e-scooter providers report a collective 323,000 rides since November, with the average ride span being a one-half-hour.

Who Is Liable for Fort Lauderdale E-Scooter Accident?

Fort Lauderdale pedestrian accident attorneys are familiar with the fact that e-scooters have been associated with safety issues in cities nationally. Emergency room doctors have reported a spike in injuries – including traumatic brain injury – as a result of scooter accidents.

As far as coverage for injuries, one should check their own individual auto insurance policy to see whether they may be covered for such a crash. Auto insurance often omits liability coverage for any motor vehicle that has less than four wheels, meaning e-scooter accident coverage isn’t likely, but it’s worth a look. Sometimes homeowners’ insurance policies can provide coverage even while one is away from their residence, but rented e-scooters may be excluded. Coverage will depend on the specific carrier and the exact language of that policy.

States may not require accident insurance coverage for e-scooters, but some companies do provide it. Frequent e-scooter riders should consider getting a personal liability umbrella insurance policy, which can provide coverage for injuries, property damage and some lawsuits.

E-scooters are here to stay in Fort Lauderdale, Feb. 5, 2019, By Brittany Wallman, The Sun-Sentinel