South Florida car accidents involving dump trucks have been piling up in recent years, prompting concern about why these commercial vehicles in particular pose such a serious threat to the public as well as workers. 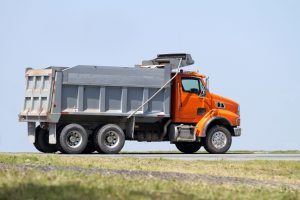 Dump trucks carry heavy, uneven loads and are known to make frequent stops. They’re often out early in the morning, when streets are still dark. Drivers who work long hours, making them more prone to fatigued driving. All these issues lead to outsized danger when you’re dealing with a dump truck, a Class 8 vehicle that can weigh 33,000 pounds or more.

Dump trucks and garbage trucks aren’t the same as the big rigs and 18-wheelers you spot barreling down the highway, but legally, they’re in the same category as other “large trucks.” Weight is the primary determining factor in terms of what is considered a “large truck” by the Federal Motor Carrier Safety Administration (FMCSA). Vehicles with a gross weight of 10,000 pounds or more is considered a “large vehicle.”

Despite the massive size and weight, dump trucks are used to make repeated trips between construction sites, suppliers, and waste drop-off points. Repeated trips increase the potential for collisions. Drivers are often under significant pressure to get the job done, leading to dangerous actions behind the wheel, including speed, distraction, and aggressive driving.

Another significant danger with dump trucks is that in their rush, dump truck drivers sometimes travel with loads that are uncovered. This can result in debris falling off onto the road – and into the path of falling traffic. This creates a serious road hazard that puts others’ lives at risk.

Garbage trucks, meanwhile, are similar to dump trucks in that they are considered heavy vehicles, though as Class 7 vehicles, they tend to weigh in at slightly less, between 26,000 to 33,000 pounds. The disparity of weight and mass between a garbage truck and passenger vehicle, pedestrian or bicyclist makes a collision with one incredibly dangerous. Data from the FMCSA reports that in a single recent year, more than 100 garbage/refuse truck deaths and more than 1,400 injuries. A quarter of those killed were sanitation workers. An analysis by OSHA on garbage truck accidents reveals dozens of fatal or serious injuries among employees in one year.

Examples of Florida dump truck accidents just in the last few weeks include:

All commercial vehicle operators, including those steering garbage and dump trucks, must comply with federal and state training guidelines, pass a CDL knowledge and skills test and clear a physical fitness test. Despite all this, drivers of dump trucks and garbage trucks still cause Florida truck accidents. More often than not, crashes can be traced back to driver error. Alcohol and drug impairment are frequently cited, as are speeding, drowsy driving, distracted driving, and failure to adequately secure cargo.

If you’re injured in a Fort Lauderdale truck accident or have lost someone to a fatal truck accident, our experienced Broward injury lawyers can work to help you secure fair compensation for your losses.