Electric scooters are gaining traction in urban hubs throughout Florida and the country. Many of these cities have already invested in bicycle share programs – several of them “dockless.” Successes on this front have prompted them to explore other alternative modes of transportation, particularly those that are cheaper and better for the environment and traffic infrastructure systems than motor vehicles. 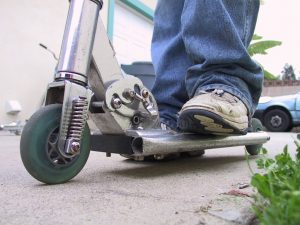 Here in South Florida, the trendy Miami suburb of Wynwood became one of the most recent communities to host an electric scooter share program. Problems that have arisen in recent months in other cities have include safety hazards from the dockless scooters being left in random places, obstructing sidewalks and public rights of way. The company that launched scooter share in Wynwood, LimeBike, has promised the city it will collect scooters that obstruct sidewalks and public ways during business hours. Other complaints involve rounding up enough of the scooters at any given time to accommodate a large group (or even just two riders) and the fact that one of the models maxes out on speed at walking pace (though some do go up to 15 miles per hour).

For us as Fort Lauderdale personal injury attorneys, the bigger issue is the interaction electric scooter riders may have with cars and trucks, particularly on crowded streets and considering many motorists aren’t used to seeing this type of transportation mode (so they aren’t watching for it). Already in a number of other locations, electric scooter crashes have resulted in serious personal injury and even death.

Exact rules for electric scooters may vary by state and city ordinance (if there is one yet), but there are a few statutes that are instructive. 15 U.S. Code Sec. 2085, federal law on low-speed electric bicycles, indicates electric bikes are generally considered “bicycles,” so riders must abide the same laws as outlined for non-electric bicycles, assuming it has less than 750 watt motor power, a maximum speed of 20 mph and functional pedals. In Florida, F.S. 316.003(21) expressly excludes “motorized scooters” and “electric personal assistive mobility devices.” The latter is a clear reference to devices like the Segway, but more closely aligns with description of an electric scooter.

If you are injured in a Florida electric scooter accident, call our Fort Lauderdale injury law services for information on your legal options for potential compensation.

Electric scooters are about to make traffic in Wynwood a whole lot more interesting, April 18, 2018, By Rob Wile, The Miami Herald