Lifeguards posted at beaches throughout Fort Lauderdale are supposed to save lives and reduce the risk of serious injury. However, for one sunbathing tourist, the actions of an on-duty lifeguard nearly ended in tragedy. Local media reported the North Carolina woman was soaking up the sun on Fort Lauderdale Beach in 2012 when a patrol vehicle ran over her. After deliberating for about three hours, jurors awarded her $250,000.

However, our Fort Lauderdale tourist injury lawyers know it’s likely that the damage caps applicable to Florida state and local government agencies in injury lawsuits, as imposed by F.S. 768.28, will reduce that award to $200,000 (the maximum any one person can receive in such a case; It’s possible more could be secured with a successful claims bill passed by state lawmakers, though that could take years). The problem with such caps, of course, is they are not only arbitrary but sometimes serve as a lawsuit deterrent, preventing all the most severe catastrophic injury claims. Further, they can make government agencies less likely to address dangerous conditions that threaten the taxpayers footing the bill. 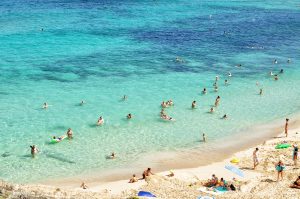 In this case, plaintiff testified she’d been lying in the sand with her shorts draped over her face when a lifeguard operating a patrol vehicle drove over her. But it didn’t end there. The now-49-year-old says she was trapped under the vehicle. City officials dispute the claim the truck tires came in contact with plaintiff, instead arguing the bulk of her injuries, defense asserted, was the undercarriage of the truck. Still, the city accepted liability in the case.

The issue jurors were left to decide was whether plaintiff was entitled to recover monetary damages for her injuries and if so, how much. A doctor testifying for the defense argued the woman still had full range of motion in each of her limbs and neck and had suffered no permanent scarring form the incident. While the woman’s attorneys sought $1 million in damages, the city’s lawyers initially offered her just $40,000. That offer was increased the week before trial to $100,000. Jurors awarded her 150 percent more than the city’s most recent settlement offer. It appears they gave greater credence to the expert witness testimony of plaintiff’s physician, who testified about the ongoing health effects of the incident, as well as plaintiff’s own testimony, in which she showed the jury visible scars on her body she insisted were the result of the city-owned truck running over her. According to her account (supported by her doctor) the woman suffers permanent neurological damage and chronic pain, for which she routinely receives painful cortisone injections. Fighting for Damages in a Fort Lauderdale Tourist Injury Lawsuit

This case shows the importance of establishing not just negligence by another, but the victim’s damages, or the sum total of losses incurred by the victim. As our Fort Lauderdale tourist injury attorneys can explain, it these include the sort of tangible, concrete losses – like medical bills from necessary treatment and procedures or the loss of wages from the time needed to take off work because of the injury. These are called economic damages. There are also non-economic damages, which encompasses things like emotional distress, pain and suffering and loss of life enjoyment. (Both fall under the umbrella of “compensatory damages,” intended to compensate the victim. There are also “punitive damages,” awarded to the victim but intended to punish the defendant for egregious conduct. Punitive damages aren’t available in cases against government entities or employees acting in their official roles.)

In this case, plaintiff’s son and husband testified that prior to the accident, she was very physically active and outdoorsy, regularly enjoying surfing, hang gliding and master-level gardening work. All of that, they now say, is gone, the chronic pain from the accident having robbed her of it.

This sort of testimony can be powerful and compelling for jurors, as clearly in this case it was.