Generally, if you trip-and-fall in a landscaped area that obviously isn’t intended for foot traffic, the property owner isn’t going to be responsible to compensate you for any resulting injuries. 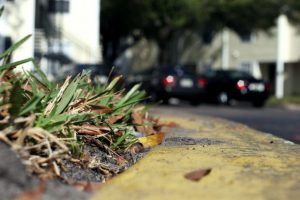 However, as the recent case of Grimes v. Family Dollar Stores of Florida reveals, when those landscaped areas have well-worn pedestrian tracks indicating it is regularly used as a shortcut, the potentially for liability is increased.

That’s according to Florida’s Third District Court of Appeal. The court conceded there were a number of prior cases (on which defendants relied) that established property owners/ controllers aren’t responsible when pedestrians/ shoppers take a shortcut through landscaped features that aren’t designed for or used by pedestrians. (Specifically, the court relied on Wolf v. Sam’s East, Inc.)

In Wolf, plaintiff tripped over a tree root as he took a short cut through a parking lot landscaped feature. The court ruled that when a person walks into a landscaping area that contains trees, grass, mulch and other features that make it clear that area isn’t supposed to be used for walking, pedestrians assume the risk in doing so – especially when there are concrete walkways that are available for their use.

According to court records in the trip-and-fall lawsuit of Grimes, plaintiff was making her way through a parking lot to a store located in a shopping plaza. She walked across one of the landscaped areas directly across from the store. This area was well-worn from use by other walkers. While crossing this feature, she tripped over a piece of re-bar that was sticking out of the ground. As a result of her fall, she suffered injuries to her knee.

She later sued the store (commercial tenant), property owner and the landscaping company that was responsible for maintenance.

Defendants responded with the ruling established in Wolf. Trial court granted defense motion for summary judgment on these grounds.

On appeal, the 3rd DCA reversed with regard to the property owner and landscaping company. (As far as the commercial tenant, the court ruled that company didn’t have any control over the landscaped area in a parking lot shared by several other commercial tenants.)

Generally, property owners have a duty to business invitees to:

The court wrote that if the parties responsible for parking lot maintenance may have had a duty to anticipate harm in that footpath because, as the well-worn area suggests, people had been using it as a walkway for some time.

What’s more, the hazard in this case was not a natural one (i.e., a tree root), but rather a not-so-obvious, man-made length of re-bar sticking just a few inches off the ground.

The court did not make a decision on whether the defendants were negligent, but rather determined there were triable issues of material fact for which they could be found liable, and the case should proceed to trial in order for those facts to be established.