A lawsuit against a vehicle manufacturer involving a seat belt that failed to protect a larger passenger was recently weighed by the Kentucky Supreme Court. 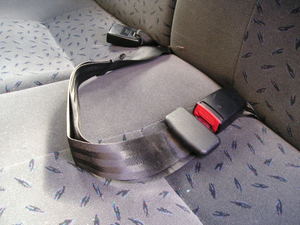 In Nissan Motor Co. v. Maddox, manufacturer liability had already been established by jurors at trial, and $2.6 million in compensatory damages (to compensate the injured) was awarded to plaintiff. The primary question for the state high court was whether an additional $2.5 million in punitive damages (intended to punish defendant) was appropriate.

The court ruled it was not as the jury instructions on the issue were improper. However, the case highlights the growing issue of motor vehicle safety of larger passengers.

A study of 155,000 drivers in severe accidents, conducted in 2010 by the University of New York at Buffalo, revealed individuals with a body mass index over 40 (a person with a BMI over 30 is considered “obese”) are 56 percent more likely to die in a crash than a person in a lower weight range. People with a BMI between 35 and 40 were 21 percent more likely to die in a traffic accident.

Another study, conducted in 2012 by researcher in California and West Virginia, found that drivers with a BMI higher than 40 were 80 percent more likely to die in a crash. For women, the difference was more pronounced – female drivers with a BMI of between 35 and 40 were twice as likely to die in a serious crash than women in a healthier weight range.

Part of the issue is that individuals who are overweight have health issues that may result in more complications if they are involved in an accident. However, what’s also a serious problem is the fact that manufacturers don’t often take larger passengers into account when designing their vehicles. For example, there are no crash test dummies approved by the National Traffic Safety Association that are representative of obese passengers or drivers. When you consider that one-third of Americans are overweight, this is a major issue in terms of vehicle design.

Last year, a research group did develop a crash test dummy to simulate a 275-pound individual, but the NHTSA has not initiated further testing on these dummies.

In the Maddox case, plaintiff – who is obese – was a passenger in a vehicle driven by her then-husband when a drunk driver traveling the wrong direction struck them head-on. The drunk driver was not wearing a seat belt and was killed. The husband suffered a fractured ankle. Plaintiff, however, sustained severe and life-threatening injuries.

She had been wearing her seat belt, but sustained fractures to her ribs, vertebrate, hip socket and hip. She suffered nerve damage, her abdomen ruptured at the site of a years-ago gastric bypass surgery and there were tears to her bowels as well. She was forced to under 75 surgeries and stayed nearly five months in the hospital. She suffered infections and strokes as a result of her treatments.

In her lawsuit against the vehicle manufacturer, she alleged her injuries were caused in large part to the manufacturer’s defectively-designed restraint system – which failed to protect larger passengers – and the failure to warn her about his defect. She argued the seat belt system was defective because it was only designed to protect individuals who were near the median weight range.

Jurors agreed and awarded her both compensatory and punitive damages.

However, punitive damages are only supposed to be awarded in cases where there is gross negligence, defined as wanton and reckless disregard for the well-being of others.

In this case, the seat belt design – albeit defective – did adhere to the federal vehicle safety regulations. Thus, the Kentucky Supreme Court ruled, punitive damages were not appropriate.