A woman is seeking $50,000 in damages on behalf of her daughter, who was injured while watching a musical production of, “Aladdin” at a local high school in Illinois. 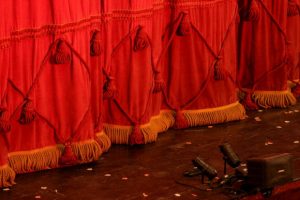 The girl, a minor, was reportedly hit on the head with a light fixture during the production. The girl’s mother alleges the youth theater company as well as the school district are liable to pay damages for the resulting injuries – specifically, medical bills, pain and suffering and the mother’s lost wages.

According to The Chicago Tribune, the girl was participating in the production for school credit in one of her classes. According to the lawsuit, her role in the production was to pick up confetti that had been fired out of a cannon at the end of Act I and then to leave through the back curtains. Behind that curtain was an adjustable stage light that was on a pole. The complaint asserts that an employee of the company adjusted the light to be about five feet off the ground. However, complainant student is 5 feet 8 inches tall. The girl reportedly was picking up the confetti and then stood up, striking her head on the light as she did so.

Plaintiff alleges as a result of the incident, she suffered serious personal injuries, disabilities, mental anguish, pain and suffering and disfigurement that are both severe and permanent. She further seeks to collect damages not just for previous medical bills, but also for future medical bills and potential wage losses as she becomes an adult.

In addition to naming the the theater company as a defendant, plaintiff seeks to compel information from the school district, specifically about whether there are additional defendants who might be named in the action.

The theater company is a non-profit art education group that serves as a host to programs in several northern states.

Although there are no national statistics on how many students are injured while participating in school plays, we know there is a lot that can go wrong. Take for example the recent Utah Supreme Court case of Benda v. Catholic Diocese of Salt Lake City. In that case, a student in a high school drama class almost died and suffered severe and permanent injuries while using a lift to replace light bulbs in the auditorium. The teacher had instructed him to climb the lift to change the bulb and then negligently instructed the other students to push it from one fixture to another with him still on top. A jury found the school liable and held that loss of consortium damages could be paid to parents for the loss of their son’s affection.

A recent report by BBC detailed a list of on-set risks that actors and crew members face in putting forth a production:

There have been other reports of stage mishaps and disasters that range from falls to problems with trap doors to costumes getting caught.

When those injured are students, liability issues may be different from those of professional theater actors. Our Fort Lauderdale injury attorneys are dedicated to fighting for just compensation for those affected.