An $11 million injury verdict was affirmed recently by the U.S. Court of Appeals for the Seventh Circuit, which held there was sufficient evidence plaintiff in Baugh v. Cuprum proved his injury was owed to the defective design of a ladder from which he fell. 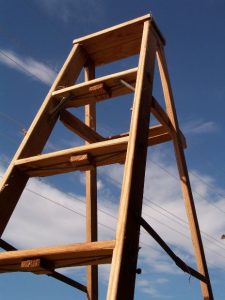 Ladder falls are a major problem at American workplaces, but they are also problematic for those off-the-clock as well. Every year, more than 90,000 people are treated in U.S. emergency rooms due to ladder-related injuries. Elevated falls account for 700 work-related deaths every year, which account for 15 percent of all occupational fatalities. The Consumer Product Safety Commission reports ladder-related accidents have increased by 50 percent over the last decade.

Some of the issue involves user error. This could mean using the wrong ladder for the type of task at hand. It could also mean improperly placing the ladder or not using the ladder the right way. It could be the fault of the ladder owner for failure to maintain the ladder or allowing one to be used that is damaged or worn. However, there are also a fair number of these cases that stem from use of ladders that are defectively designed or defectively manufactured.

When a ladder is designed in a way that is not safe and results in an injury, it can be grounds for a product liability lawsuit.

In the Baugh case, plaintiff fell off his ladder at his own home while replacing gutter screws. Due to his fall, he suffered a traumatic brain injury. His wife filed an injury lawsuit on his behalf, alleging the ladder had been defectively designed.

At trial, both sides presented several expert witnesses. Plaintiff’s expert witness, a mechanical engineer, testified the ladder could have safely held plaintiff if the ladder was constructed with thicker legs and had longer gussets, which are the metal bars that offer bracing support to a ladder. There was testimony concerning how many pounds could be exerted per square inch of the ladder and the way in which plaintiff was standing.

Defendant’s expert witness testimony was contrary to this, but jurors ultimately sided with plaintiff. They awarded $11 million in damages to the plaintiff.

Defendant appealed, arguing plaintiff’s expert witness should not have been allowed to testify. However, the appeals court noted the supporting arguments given by the defense concerned the weight given to the testimony by the jurors, rather than the admissibility of that testimony. The court held that plaintiff gave enough evidence to show that not only was the ladder defective, but that a feasible alternative did exist.