Boating is a way of life in Florida, but it’s also a source of serious injury and even death here in the Sunshine State. The U.S. Coast Guard’s 2019 Recreational Boating Statistics Report released this summer once again named Florida No 1 for annual boating accidents – 679 total that year, leading to 62 fatalities. It’s worth the reminder for caution as we approach New Year’s Eve, given that boating accidents tend to spike during major holiday weekends. 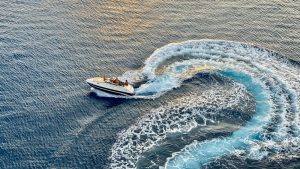 After all, it was only one year ago in the early hours of New Year’s Eve that a 42-foot custom speed boat named “Blue Steel” crashed into a jetty near Fort Lauderdale shortly after midnight on Dec. 31, 2019.

The driver of that boat, a chief executive officer of two separate insurance companies, now faces five misdemeanor charges and a $100 million lawsuit. He’d reportedly just purchased the vessel when he crashed it onto the jagged rocks, where a husband and wife aboard were ejected. The female plaintiff, who was celebrating her birthday that day, reportedly suffered a fractured skull, brain injuries, broken nose, permanent facial scarring, leg injuries, rib injuries and internal injuries.

As The Sun-Sentinel reported, the couple allege the CEO, a longtime friend, was under the influence of wine and mixed drinks and was driving recklessly and distracted at night. No one kept a lookout, they said, and defendant, who was inexperienced and not using GPS, was driving so fast the boat planed over the water and occupants had to hold on tight to avoid losing their balance. He’d missed a port turn into the unlit jetty and attempted to circle back and try again, landing at a dangerous angle against the rocks. Rescue efforts were complicated and delayed by the precarious position of the boat on the rocks.

An attorney for the CEO denied the criminal charges and blamed the “well-known and dangerous conditions of the jetty.” Another attorney lamented the end of a years-long friendship “over money.” Meanwhile, one of the plaintiff who’d been celebrating her 33rd birthday has undergone two brain surgeries, has yet to return to work and her injury lawyer says she “will never be the same again.”

This is just one story out of hundreds stemming from boating accidents every year. Even when victims live, they are often forever changed. And while the circumstances of each incident are different, our Fort Lauderdale boating accident attorneys know there are some repetitive common themes.

As stated earlier, Florida routinely leads the nation in boating accidents, deaths and injuries. Reportable boating accidents in any given year number somewhere between 500 and 800, resulting in hundreds of injuries, dozens of deaths and millions of dollars in property damage.

Boating accident liability in Florida is usually based on negligence. If a boat operator does not maintain and operate the vessel in a safe and reasonable manner, he or she could be held liable for injuries that result.

Operating a boat while impaired is one example of negligence. Others would be:

If you are injured in a Fort Lauderdale boating accident, our skilled injury lawyers at The Ansara Law Firm can help answer your questions and help you seek justice.