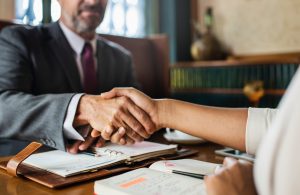 The truth of the matter is, you may not have to sue anyone at all, and even if you do, your case isn’t likely to go to trial. Most Florida car accident injury claims are resolved through settlement negotiation.

Even when cases do go to trial, it’s sometimes only to resolve a single matter of dispute. For example, it’s not uncommon for one driver to admit fault for causing the crash but argue the amount of compensation for which the plaintiff is asking is too high. In that case, the only question is, “How much should the defendant pay?”

Every case is different, though, so it’s important never to assume the best course of legal action to pursue financial recovery before speaking with an experienced Fort Lauderdale car accident lawyer.

If you get into a truly minor fender-bender – no one is hurt and property damage is under $500 – you can both pull over to a safe location and agree to exchange insurance information and file a claim with your own respective insurers, as Florida is a no-fault state.

However, for property damage in excess of $500 or if someone’s hurt or killed, law enforcement needs to be called immediately. One or more officers will respond (depending on the severity) and file a Florida car accident report.

Take photos, if you can. Note the weather and road conditions – and never apologize. Saying “sorry” is often the natural inclination, but it can imply fault. Avoid this – even if you think you were – because often all the facts of the case aren’t clear until later.

Florida is a no-fault state for auto insurance, meaning no matter who caused the crash that your medical expenses and wage losses (up to $10,000) will be covered by your own Personal Injury Protection (PIP) insurance policy. It will additionally cover up to $5,000 in death benefits to your dependents if you die.

It is only if your injuries cross the statutory “serious injury threshold” that you are allowed to file a claim for payout from the bodily injury liability coverage of the other driver(s).

If the other driver doesn’t have insurance – or the insurance isn’t enough to cover the full extent of your losses, you can then file a claim with your own auto insurance company for uninsured/underinsured motorist coverage.

Sometimes, insurance agents will contact crash victims soon after a collision and start talking settlement. If your injuries were serious – you broke bones, you were hospitalized, had to take time off work, will be left with permanent significant scarring, etc. – it’s wise to leave those negotiations to a car accident lawyer.

Auto insurers are bound to certain standards by law, but it’s rare that any insurer is eager to pay up quickly on a policy limit, even if the crash was serious. Your attorney can help you negotiate a fair settlement at this stage – without ever having to take it to the courts.

“Settlement negotiation” refers to both sides’ effort to have the case resolved by mutual agreement rather than take their chances (or spend the time and money) having a judge/jury decide.

It only becomes a matter for a judge when those involved can’t agree and are at an impasse on critical issues.

Even then, settlement negotiation often continues leading all the way up to trial. Settlements are sometimes even reached on the eve of trial or just before a jury comes back with a verdict.