Florida has more fatal motorcycle accidents than any other state in the country. Data released earlier this year from the National Highway Traffic Safety Administration (NHTSA) revealed 616 motorcyclists were killed in the Sunshine State just in 2015 alone (an uptick from the initial estimate of 557). 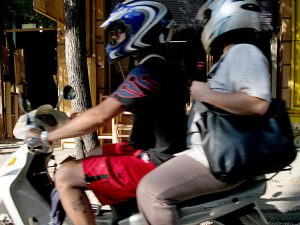 Economic costs can include:

Meanwhile, comprehensive costs are those that include economic costs, plus the valuation for the lost quality of life.

When broken down at the state level, about half of Florida’s deadly motorcycle accidents involved a rider who was not wearing a helmet, and half who were. It’s estimated that 193 lives were saved in the state by the use of motorcycle helmets, but 109 more deaths could have been prevented had they been used more often.

Our Fort Lauderdale motorcycle accident attorneys recognize that helmet use is a touchy subject among riders. Since 2000, Florida has not required motorcycle riders under the age of 21 to wear a helmet, so long as the rider obtains at least $10,000 in medical insurance coverage. While some crashes may be unsurvivable no matter what type of gear you have on, but helmets are designed to absorb the impact and lesser injuries.

Those who ride without a helmet say they enjoy – and have a right to – a feeling of freedom and being unencumbered. But there is no question helmets do prevent injuries, or lessen the impact of others.

One such study, published in the American Journal of Public Health in 2004, found that motorcycle occupant deaths spiked nearly 50 percent just in the single year after the law changed (statute previously required a helmet of all motorcycle riders and operators). Florida isn’t the only state to move toward the helmet-less trend, though. Texas, Louisiana, Kentucky and Arkansas have also weakened their motorcycle helmet laws.

This trend in Florida is of particular interest because we account for an outsized number of motorcycle deaths, relative to our driving population.

Other researchers have uncovered an uptick in the number of traumatic brain injuries in states where helmet laws have been taken off the books.

From an injury law standpoint, it should firstly be noted that motorcycle helmets don’t – and couldn’t – prevent all injuries. While they could reduce certain injuries, that’s not necessarily a point that can be raised by the defense, given that adults choosing not to wear a helmet aren’t breaking any state laws in that regard. That creates a clear difference from the so-called “seat belt defense,” wherein defendants will assert plaintiff’s or decedent’s injuries are worsened by the fact that they violated the law by not wearing a seat belt.

If you are injured in a Fort Lauderdale motorcycle accident, we can help.