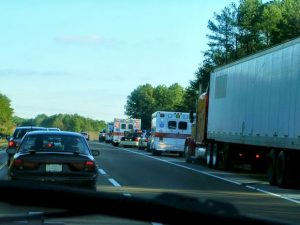 Previous research by the organization indicated there were approximately 25,000 crashes every year attributable to debris in the road, with most of those situations involving debris that fell off or was thrown from other vehicles. These incidents resulted in approximately 90 deaths annually. That was in 2001. Today, researchers say that figure has doubled, with more than 50,000 police-reported crashes every year involving road debris, resulting in more than 9,800 injuries and approximately 125 deaths. These latest figures were based on data collected between 2011 and 2014, during which time there were a total of 200,000 crashes resulting in 39,000 injuries and 500 deaths.

Compared to car accidents that didn’t involve road debris, debris-related wrecks were almost four times as likely to happen on interstate highways. Almost 40 percent of all deaths stemming from road debris happened because a driver tried to swerve to avoid hitting the object.

This study included in its numbers debris that was attributable not just to vehicle sources, but to others as well, including fallen tree branches that hadn’t yet been cleared from the road. Researchers said they included a greater range of road debris types because, “Debris from any source including but not limited to vehicles can pose a significant safety hazard.”

Our Fort Lauderdale car accident lawyers know this latest report sheds light on a dangerous problem and raises questions about liability in these situations. When road debris – either in whole or in part – causes a motor vehicle crash, sorting out issues of responsibility and who should pay can be challenging.

First, we would want to identify whether the road debris was left by a known third party. For example, if a nearby homeowner fails to trim a tree that dangerously overhangs a roadway and one of the branches fall to the ground, creating a roadway obstruction, that could be grounds to assert liability. If the debris in the road were caused by cargo that fell off the back of a commercial truck, one might take action against the company.

Secondly, we would want to know if the debris existed in the road for such a period of time that the responsible government agency should have taken action, but failed to do so.

Almost two-thirds of debris-related crashes during the study period were reportedly the result of items falling out of or from a vehicle as a result of improper maintenance and/ or drivers not properly securing the load.

Interestingly, drivers who crashed into or were struck by debris were substantially more likely to be men, as compared to drivers involved in non-debris-related crashes. It’s not very clear why, though researchers hypothesize it may have something to do with the fact men have a greater tendency to speed, which has been shown to have an effect on the severity of these crashes.