Dog bite injuries in Florida are handled under a legal theory known as “strict liability.” What this means is, according to F.S.767.04, a dog owner may be liable if his or her dog bites someone – even if that dog had no history of any vicious behavior and even if owner had no prior warning or knowledge the dog might bite. The injured person does not have to prove the owner’s failure to use reasonable care played any sort of role in causing the bite. Rather, they must show the defendant owned/ controlled the dog, the dog bit the victim, that bite caused injury to victim. 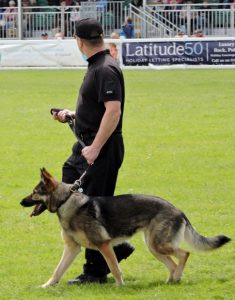 There are, however, a few exceptions to the rule. Those include:

Dogs used by law enforcement are known immune from these types of actions in Florida, though such claims would generally fall under an “excessive force” allegation, as opposed to a dog bite injury claim. Generally, the courts are going to look to see whether the force used in an arrest was reasonable and secondly whether authorities gave you a chance to surrender before giving the K-9 unit the order to chase/ attack.

Dog bites can cause serious physical harm and emotional distress. It’s important for all victims to discuss any potential claim with an experienced injury lawyer.

In the recent case of Finch v. Thurston County, the question before the Washington Supreme Court was whether a police officer, bitten in the line of duty by a police dog owned/ controlled by a different police agency, could pursue a claim of strict liability for that bite. The answer was no.

It should be noted that Washington state also allows dog bite claims to be asserted under the legal principle of strict liability. However, under that state’s law, there is a statutory exception that specifically includes bites inflicted by the “lawful application of a police dog.”

According to court record, plaintiff, while working as a police officer for a small city outside of Olympia. He responded to a call to investigate a possible burglary at an old brewery. The officer surveyed the scene and then requested a K-9 unit to assist.

Two deputies from the local county agency responded (per an interlocal cooperation agreement) with a trained dog, named Rex. The three officers decided they would continue their search of the site together. The building was dark except for officer flashlights. One of the deputies loudly announced their presence. No one responded, and the dog was ordered to search the site. The unleashed dog tracked the site of a suspect in and out of several rooms. Officers followed the dog to a room where suspect was hiding. The county deputy called the dog back to him. Moments later, the city police officer spotted the suspect and shouted at the suspect to show his hands. It was at that point Rex bit the city officer. Deputies had to physically pull the dog off the city officer before they could take the suspect into custody.

Plaintiff drove himself to the hospital and had to undergo surgery for his injuries.

In June 2012, almost two years after the incident, plaintiff filed a dog bite injury lawsuit against the county, asserting strict liability. The very next day, a state house bill went into effect that exempted the lawful application of a police dog as an exception to strict liability for dog bites.

Trial court dismissed plaintiff’s claim, concluding the bite did occur in the lawful application of a police dog. Plaintiff appealed, arguing that exception didn’t apply because the search for the suspect was already over and the dog had been recalled back to the deputies when the dog attacked him.

The state supreme court disagreed with plaintiff and determined it was appropriate to apply the exception. The reason, the court ruled, was because the dog was:

Dog bite injury lawsuits can pose more complications than it might seem at first blush. We can help you determine the best course of action.