Numerous studies have established that bicyclists who wear a helmet are less likely to suffer serious head trauma. However, this is in comparison to those who wear no helmets. Truth is, you can sustain a traumatic brain injury if you’re involved in a crash while wearing one. 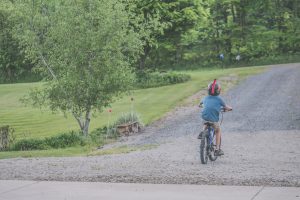 Recently, a group of four bicyclists traveling together in Port St. Richey were seriously injured when the wheelchair lift gate of a mobile PET scan vehicle somehow became dislodged and struck the riders one-by-one, FOX 13 News. Two of the bicyclists had to undergo emergency surgery.

Although the particular circumstances of this bicycle accident are somewhat unusual, trucks pose a serious threat to bicyclists, and so do cars, vans and sport utility vehicles. In many of these instances, especially if the vehicle is traveling fast, a helmet may help reduce the risk of serious injury, but it doesn’t eliminate it. Even the Bicycle Helmet Safety Institute notes there is “no such thing as a concussion-proof helmet.” Roughly three-fourths of all fatal bicycle accidents involve a head injury. Although very few bicyclists who wear helmets die in crashes, nearly 15 percent of those who suffer serious injury were wearing one.

There are also incidents in which bicycle helmets fail. That could be the basis of a Florida product liability lawsuit, but it will depend on the circumstances of the crash. Biomedical engineers at Virginia Tech rate bicycle helmets according to concussion risk, based on a five-star system.

The National Highway Traffic Safety Administration reported in its most recent count there were 840 bicycle accident deaths in the U.S. in a single year. Florida has long held the No. 1 spot on this list for having the most fatal bicycle accidents of any state.

There are two basic types of bicycle crashes: Falls and collisions with cars. In both cases, helmets can help reduce the risk of a concussion or other traumatic brain injury.

A 2016 analysis published in the American Journal of Surgery scrutinized nearly 6,300 patients who had been injured in bicycle accidents, of whom 25 percent had been wearing helmets. Overall, about 53 percent of bicyclists injured suffered severe brain trauma, and 3 percent died. Those riders who were helmeted were half as likely to suffer a serious brain injury and 44 percent less likely to die in a bicycle crash. The risk of facial fractures also were reduced by 31 percent when riders donned a helmet.

So we do know they work, they just aren’t infallible.

It’s also important to point out that whether you were wearing a helmet or not should not impact the outcome of any Florida bicycle injury lawsuit. Only riders under the age of 16 are required to wear bicycle helmets. Furthermore, per F.S. 316.2065, the failure of a person to wear a bicycle helmet or of a parent/guardian to ensure a child is wearing a bicycle helmet is NOT to be considered evidence of negligence for the purpose of contributory negligence in injury litigation.

Fort Lauderdale bicycle accident attorneys can explain that contributory negligence is the degree to which the person injured contributed to his or her own injuries. Some defendants have argued that failure to wear a bicycle helmet is contributor negligence for the purpose of reducing damages (the amount a defendant has to pay). This statute makes that argument strictly off-limits.